A Toddler's Reaction to a New Baby

Many people have asked me if Bubbles knows about Bun, and if so, how her reaction has been.

I decided to tell Bubbles really early on about her soon-to-be new sibling. In fact, she was the 2nd person I told after Roboman! She reacted with a question: ‘Why the baby cannot come out, Mummy?!’ 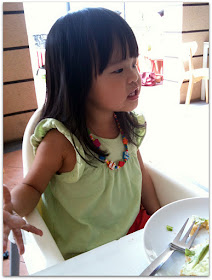 She has since asked many questions and talked a lot about Bun. I’m glad I made the decision to share the news with her so early, as this piece of information obviously interests her very much, and thoughts about it are constantly brewing in that little head of hers. I’m hoping this gives her enough time to get used to the idea, and subsequently better accept her new sibling, and the new status of no longer being an only child (and grandchild).


We took her to my very first gynae visit, where Roboman carried her up to see the scan of the foetus. In the 2 weeks that followed, she suddenly became very unfriendly to other younger kids/babies, and acted out violent behaviour on her little baby doll. I was slightly shocked although I understood that she was dealing with feelings that were unfamiliar to her. She would squeeze her baby doll’s head, or poke the eyes, while keeping a lookout for my reaction. Each time she did it, I could sense that she was confused by her own feelings, like she didn’t know why she was doing what she did!
I would ask her: Would you like it if someone squeezes your head/pokes your eyes? She would immediately say No. Sometimes I would ask: How would you feel if someone does that to you? She would pause and reply Sad, or Bad. She would then stop what she was doing.

Once, alarmingly for me, she suddenly poked my stomach and said: I poke poke poke the baby and the baby will cry and cry. Thankfully this only happened that one time.

I suspect her acting out was partly because I couldn’t give her much attention those 2 weeks as well. She was dealing with the uncomfortable new feelings while having to handle Mummy being bed-bound, and unable to carry or entertain her. I was thus very careful never to tell her that I couldn’t do anything because of Bun. I would give other truthful reasons like being dizzy, or having a backache.

We are very thankful now that those ‘violent behaviour’ moments have now dwindled and are few and far in between. Instead, it has been replaced with the most interesting questions, and sometimes really sweet thoughts that she has been sharing regularly with me.

I will write about these in an upcoming post :)
Corsage@A Dollop Of Me on Wednesday, December 07, 2011