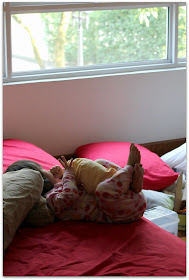 One of the reasons why I have been so tired lately, is because Bubbles has been waking up almost every night. I have found that I can survive on 5 hours of sleep a day, but when that 5 hours is interrupted by a distressed toddler in the middle of the night, I have difficulty functioning.

It is quite different from the earlier days when she was a newborn. Then, I could afford to take naps during the day while she slept. Now, she only takes one nap a day and for a measly 1.5 hours. I have to do every chore during that short span of time.

In the past week or so, she has been getting up around 2am, crying out for me. On the better days, she would demand a change of diaper, sometimes twice in the night. On the bad days, she would seem really upset, cry, and express strange things like telling me she does not want to poo, and that she wants to suck her thumb (both of which are perfectly legitimate things to do in the middle of the night). She would then toss and thrash around in bed, agitated, for up to 2 hours.

I read about toddler nightmares and night terrors and I think hers varies between the two. I suspect it is due to lack of rest (she just prefers to play these days, at the expense of sleep), and perhaps some underlying stress from the introduction of the potty and us encouraging her to stop her thumbsucking.

Thankfully, she seems perfectly cheerful and fine during the day.

Still, I pray this phase will end soon. The lack of sleep is making me more sensitive and grouchy than usual. Soon, I may need to wear sunnies all the time to cover my ever growing dark circles. (Oh yes, I bought a new pair to replace the pair I lost! They're nice but not as nice. Boo)